RINGLESS VOICEMAIL & SMS AS LOW AS 1.2¢. GET TEN PERCENT OFF YOUR FIRST MONTH. USE PROMO CODE STARTUP.

Cost effective and easy to use

The Number One Team for Text Blast Services for Any Business

We're a team that helps you send out a text message blast to your customers. Increase your business's marketing reach with the best text blast service there is.

Compose your message in two ways - either by using dynamic field inputting, or broad generic messaging.

Determine the start time, end time, and speed for all deliveries to customers. 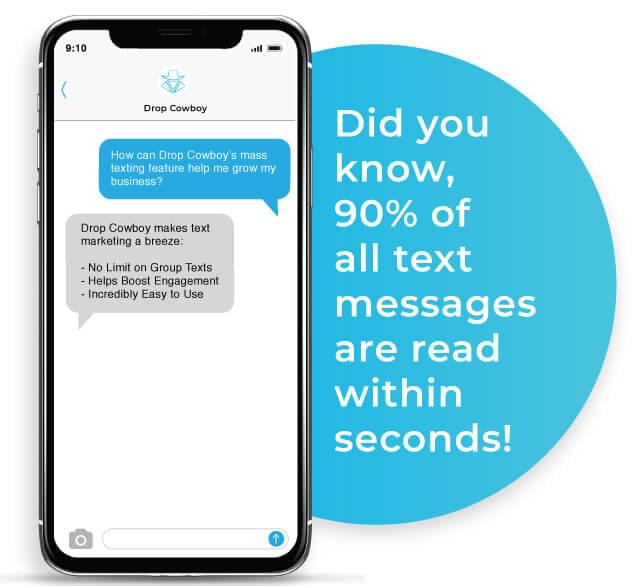 Drop Cowboys Text Blast is the ultimate solution for any small to enterprise level business looking for success with SMS marketing. With subscriptions as low as $20.00 you can be up and running in minutes.

Use our local pool of numbers or purchase your own and display a local caller ID to your recipients.

We use data driven analyses to show you the effectiveness of your marketing campaigns.

See for yourself why so many have embraced
TRY IT NOW

Take Your Marketing to the Next Level With Text Blast Software

The majority of the conversation about marketing revolves around the use of mobile internet. The problem, however, is that smartphone penetration isn’t as high as many people imagine.

Despite the rate of smartphone use rising dramatically over the last few years, the total number of smartphones in circulation in the US is around 102 million - much lower than the total population. Contrast that to the fact that 98 percent of people in the US currently have access to SMS- capable phones, and you can see why SMS marketing messages are so useful. Penetration is much higher.

In a text blast, an organization sends out a large number of text messages from a single source simultaneously. The purpose of a text blast is to engage customers immediately and connect with them on a massive scale to boost purchases, raise awareness, and build a brand.

Here at Drop Cowboy, we make sure you're set up and ready to start taking advantage of the many benefits offered by text blast services. Get in touch with us today and we'll help you sign up for a text message blast service that takes your business to a whole new level.

A Service That Provides Several Benefits

The reason so many businesses and organizations use them is because of their effectiveness in achieving a range of goals. For starters, text blasts are about more than just advertising to customers. They’re also about helping people to move down your sales funnel.

After all, it’s not just conversions that you’re after, but also increase brand awareness and engagement. People often do not know what it is that you sell, making text blasts a popular way to spread the word.

While the utility for businesses is clear, text blasts are something that churches, charities, and other organizations can use too. Many people have received a text blast from their local sports club or religious institution informing them of an upcoming event. Text blasts are, therefore, an organizational tool that managers can use to get communities involved with their latest projects.

See for yourself why so many have embraced
TRY IT NOW

How Our Text Blasts Work

Getting started with our text blast service is simple. Together, we'll make sure you're ready to start connecting with your customers in a whole new way!

If you want to send a text blast, the first thing that you have to do is sign up for an account at Drop Cowboy. You can either take advantage of our Pay as you go pricing to see whether you like our services or you can commit right away. Either way, the platform provides an essential set of features that make sending mass messages possible.

The next step is to log onto Drop Cowboy's text blast messaging platform. The app will guide though setup. Need additional help, not to worry we offer in app support via chat.

Starting a conversation with your audience is simple. You just choose the appropriate list, create your content and schedule your delivery.

Business owners around the country have been relying on the team at Drop Cowboy for years. They know that when they work with our team they're receiving reliable text blast services that connect them with their customers, help grow their revenue and lead to boosted business success. Get started with our team and know that you're working with the nation's #1 choice for a text message blast software provider.

Here at Drop Cowboy, we believe in quality. That's why we offer a 100% service guarantee. We provide you with the option to pay as you go so that you have an opportunity to see if this solution works for you.

At Drop Cowboy, we offer some of the lowest prices in the industry. When you use our software, you know that you're not only getting a superior text blast program but that you're also getting it at the lowest possible price. Take advantage of our customizable plans that enable you to get only the features you need for your business's specific needs.

If you want to find out more about text blasts or try them out for yourself, then Drop Cowboy is here to help. With us, you can send out SMS campaigns to all of the people on your contact list to raise awareness and boost conversions.

Get in touch and let's get to work creating a text blast campaign that makes waves in your business's success!

We support sending ringless voicemail to more than 80 countries including

See for yourself why so many have embraced ringless voicemail!

There's no monthly fees, minimums, or commitment to get started.

Use of this service requires that you comply with all rules, regulations, and laws including the TCPA, TSR, national do-not-call registry . You must obtain opt-in permission from your contacts where required. Additional restrictions apply. See our Terms of Service for details.

If you received an unwanted message from one of our customers, please report it to support@dropcowboy.com .

Join now to discover why Drop Cowboy is a leading provider of global voicemail and sms services.